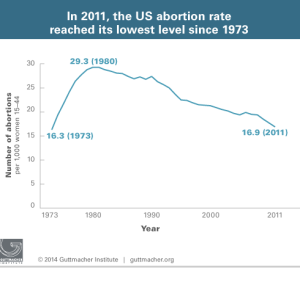 All but six states posted decreases in their abortion rates from 2008 to 2011. Alaska, Maryland, Montana, New Hampshire, West Virginia and Wyoming posted gains. With rates at 27 to 34 abortions per thousand women, the Northeast Corridor, namely New York, Maryland, DC, Delaware and New Jersey were home to the highest abortion rates. At the lowest rates of one to five per thousand, Wyoming, Mississippi, South Dakota, Kentucky and Missouri lead the scoreboards, though the numbers tally only in-state activity. So outliers such as Wyoming, for example, where more than 90 percent of abortion patients in 2009 went out of state for their operation, fair better than they should and hide the tales of tribulations for their citizens.

Though the data reflects 2011 activity (you would think compiling got quicker with computers…), at least it is fairly clear that none of the abortion restrictions led to this development, i.e. unwanted pregnancy declines were organic. Maybe that is the best news yet. Let’s continue to make pro-plan the agenda.

The Guttmacher Institue offers a US map with good albeit now somewhat dated data points on each State for your reference. And the Washington Post compiled nice graphics here and here for State trends and comparisons.
How is your State fairing?